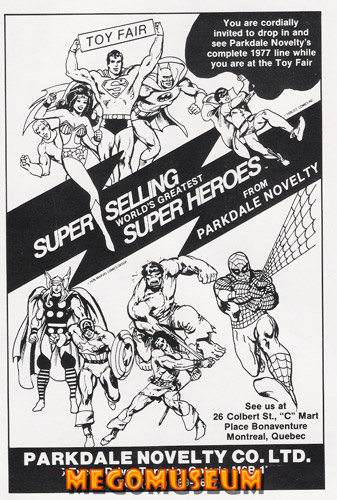 Parkdale Novelty was Canada's premier mego supplier starting with Mego during the $0.88 campaigns. Parkdale distributed every Mego line in the early seventies including Fighting Yank, Maddie Mod, Dinah Mite and Action Jackson. The Owner of Parkdale Novelty Morris Kotzer was responsible for the inception of the 12" Mego Superhero figures and in recent years, the tape of Mego commercials running around. (The sons of the founder sold it and the remainders of their inventory at a Toronto Toy show back in 1992)

Parkdale made some changes to Mego pieces, for one they offered a Horse with the Planet of the Apes. It comes in a longer box and is highly sought after,. The Canadian Planet of the Apes treehouse box and Star Trek Bridge Play set are smaller than the US releases,

The relationship between Parkdale and Mego changed around 1976 when Quebec based Grand Toys began to distribute many of Mego's upcoming properties including Micronauts, Cher and Comic Action Heroes. Eventually Grand wrested the best selling "World's Greatest Superheroes" line from Parkdale (this was in 1979). Parkdale Novelty is still in business today and is a leading Plush novelty distributor in Canada.

Parkdale Carded (Dual Card) Incredible Hulk are difficult to find, the Spider-man in this series is even more of challenge. To date, no other Mego Superheroes have been found on dual cards.

Parkdale Planet of the Apes Horse, Catapult and Wagon set

Both Parkdale Novelty and later Grand Toys sold these 12" Wonder Woman fashion outfits which are now hard to find collectibles. 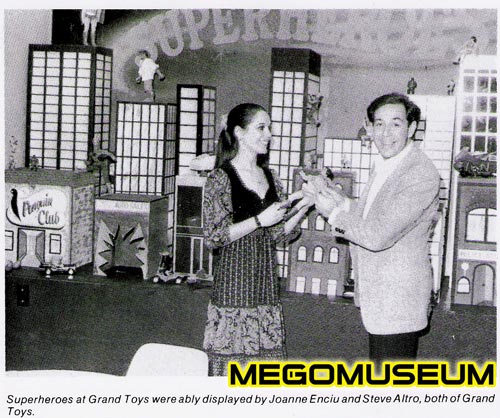 It's a Grand Toy! Grand is a Quebec based Toy distributor that began offering Mego Product in '76 with the Comic Action Heroes, Muhammad Ali and Cher. Grand also worked with AHI, LJN and Durham. Eventually Grand would become sole distributor for Mego in Canada. Mego made two attempts to purchase Grand, the first in the 1970's was squashed by the Canadian Government, the second attempt was halted by Mego's own bankruptcy.

In 1979 Grand began distributing the World's Greatest Superheroes line (which was launched in Canada by Parkdale Novelty) and produced their own series of Mego Superhero cards.

Few companies produced as many Foreign Exclusives as Grand, from the Black Hole, Star Trek TMP, Micronauts. Grand carried many Mego products that didn't make it into the US. When Mego went bankrupt, Grand sent sales Manager Charles Marshall to the Orient to reopen the Lion Rock Facility to insure Christmas orders of Dukes of Hazzard and Eagle Force product to Canadian retailers such as Consumers Distributing. Grand carried the Dukes line until 1985 (!) Below is a listing (with as many pics as possible!) 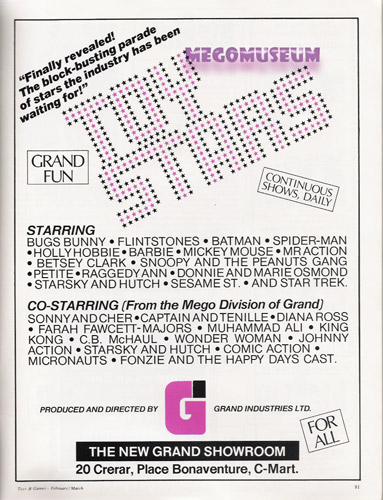 Carded Max from the Black Hole still bears the K-Mart price tag of a dollar, Star, Bob and Holland are courtesy of Craig MacKillop

The entire black hole line was cleared out through K-Mart stores in Canada, Humanoids, Stars and old Bobs were cleared out in 1981 for $1.00 each. Grand Toys did a clever cross promotion with Shreddies cereal in 1980, kids who sent in 3 box tops and a small amount got 3 Mego Black Hole figures, I was one of those kids who took advantage of this offer.

The big get out of the line is the Humanoid, which was oddly enough a bit of a pegwarmer. If anyone has a carded Black Hole Humanoid for sale, please contact me through the site.

Grand toys Carded Penguin and Incredible Hulk Figures. Grand had the series from 1979 until the end of the series run so carded Grand WGSH are not easy to find. Some characters such as Batman and Superman haven't been seen!

The Mego Superheroes Batmobile in a Grand Toys box, these were released in 1979/80.

This Mego 12" Spiderman is very difficult to find in a Grand box, the Parkdale Novelty version is much more easily found. Only Grand and Harbert seemed to use this artwork.

The Mego Comic Action line was released by Grand Toys on two different cards, the first was similiar to the US 2 window style but the later card (note the Logo changes from a G to the still in use rainbow) is unqiue to Canada.

Mego Comic Action HeroesSpider-Car was also released by Grand in 1978 but it differs greatly from it's US counterpart, it features only two figures, not three and the box colour is different. It's also bilingual but that's a given. There must be a Batmobile out there as well.... .

Mego Comic Action exploding tower playset, the box is smaller than the US release.

Mego Comic Action Fortress of Solitude playset in a Grand Box, the box is about 40% smaller than the US version.

Mego Comic Action Bat Copter in a Grand Toys box, it's actually hard to find the Grand Toys logo on this but it is present on the bottom.

Peter Criss in a Grand Toys Canada box, these are quite hard to find. Note the Zeller's price tag, it seems that Zellers bought the majority of these for Canada.

Mego Pocket Heroes on the hard to find "Denim cards" with the Grand Logo. These figures are extremely difficult to find, especially Spiderman. It's not known if Grand carried the white card series. Note the "Bi-Way" price tag on the Hulk package.

The Mego Micronauts were huge for Grand, I had one employee tell me they couldn;t ship them fast enough. Grand released a good deal of hard to find Micro pieces such as Ampzilla, Sharkos and Lobstros.

New to the site is this carded Kane from Buck Rogers, it's not easy to find a Grand carded Buck character, so even common old Draco is hard to find

The Mego Aliens from the first Star Trek movie were released by Grand on generic cards, if the card has been resealed, it's likely a forgery, the Canadian CHiPs cards were smaller than their US counterparts.

The Mego Star Trek the Motion Picture model kits were released by Grand Toys in great quantity, these were available at close out centers in the mid 1980's.

Even the ill-fated Mego Love Boat line of action figures were distributed by Grand. The Canadian cards are smaller and of course, bi-lingual. Grand also carried the Vacuform Love Boat playset in Canada, something Mego didn't bother to do in the US.

The incredibly rare Grand Toys Love Boat Playset, this thing is really fragile. You have to really, really love either Mego and Love Boat to want to own this thing.

Plaidstallions: A Tribute to Seventies Toys and Fashion

Mego Museum: The world's best website devoted to the toys of Mego Corp.